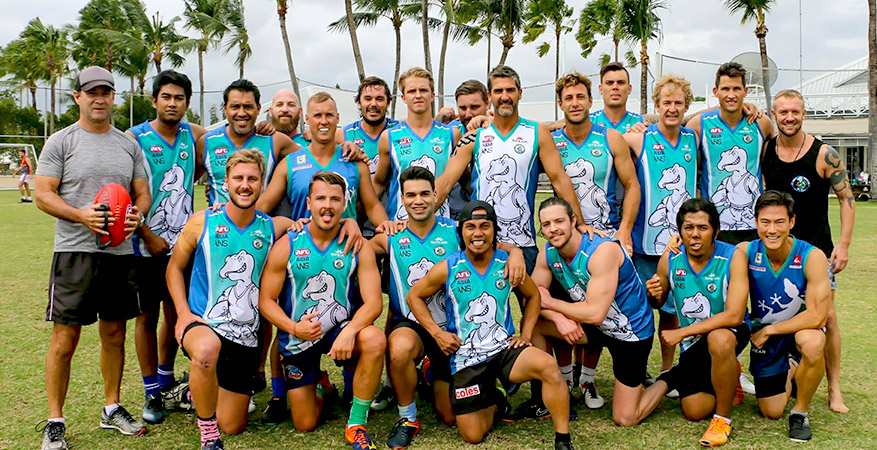 Known for their fun attitudes to life off the field and sportsmanship on it, the Geckos have won many friends all over the Asian football world and beyond. Being the only team in the world that wears boardshorts on the field helps cement the laid back, fun loving attitude that is typical of the Geckos

History:
The Bali Geckos, formed in 1997, are the island’s only Australian Rules Football team and have been active in developing and introducing the game to local Indonesians and travelling foreigners.

Our women’s team has thrived since being launched in 2019.

Training is held on wednesdays at the Geckos base at Finns Recreation Club in berawa. Juniors and the women’s team start at 5pm while the men take the field at 6pm.

The Geckos host one of the biggest football tournaments in Asia annually, “The Bali Masters” in June. In 2019, there were over 50 teams participating across the over 35s, 45s and 55s divisions. It will resume in June 2022 now the borders have reopned.

The geckos are a regular at every Asian Championships; with a history of strong results. Runners-up 3 times to Asian Powerhouses Singapore and Hong Kong, but joint winners in 2000 and 2002 when joining with Jakarta to form an Indonesian side.

In recent years the geckos has seen a resurgence back to the top of Asian Football under the guidance of Coach Rick Olarenshaw and Life Members Greg Hinchcliffe as President. The Bali Geckos were Back-to-back Division 2 AFL ASIA Champions in 2016 and 2017. A fresh allegiance with the Jakarta Bintangs and Borneo Bears as the Indonesian Volcanoes, in 2018 proved to be very successful winning the Division 1 AFL ASIA title, and fielding a competitive team in division 2.

2022 Forecasted a big year for the Geckos but covid had a different plan for the club. With Bali shutting down to all tourists entering and many Geckos players relocating back to Australia and abroad the club seemed vulnerable to collapse. The squad that remained men, women and juniors met throughout the year to stay connected, sometimes playing sports such as soccer, occasionally kicking a footy but importantly checking in on each other. Our captain Jack Aheanr even ran from the north of Bali down to Canggu, 85km in less than 12hr!

There were some classic clashes versus our domestic neighbour Jakarta Bintangs in 2020 and 2021. The ‘Trade Indy Cup’ mixed domestic competition was also introduced, composed of mens and womens players drafted into 3 teams. The tournament was a huge success with the 2nd season of this format commencing in April 2022

As the world returns to normality in 2022, the Geckos aim to kickstart a full scale Indokick Program to bring the great game of AFL to more Indonesian juniors around Bali, with the assistance of new club sponsor Away Hotel Camakila.

The Bali Masters are returning in June while the Geckos will hold the inaugural Bali AFLW Tournament in october. We will travel to the Asian Champs as the Indonesian Volcanoes with teams potentially all 3 divisions, and for the first time the Geckos women participating.